The cruise line offers affordable luxury accommodation, an upscale and relaxing onboard experience, and European hospitality.

MSC Cruises is the largest privately-owned cruise line in the world and has been a leading global cruise line for over 30 years.

In 1970 Mr Gianluigi Aponte founds the Mediterranean Shipping Company, MSC, with the acquisition of its first cargo ship, Patricia.

MSC first entered the cruise market in 1988 when it purchased the liner Monterey.

MSC Cruises was then established in 2002 when it became a subsidiary of the MSC Group.

Since then, MSC Cruises has become the third biggest cruise line worldwide, with a fleet of over 19 ships.

It is now expanding heavily in the US and Caribbean market. And part of this was the launch in 2019 of the Ocean Cay MSC Marine Reserve.

The cruise brand is the leader in Europe, South Africa and South America. MSC Cruises appeals to passengers that are seeking a Mediterranean feel and a cruise line focused on the destination.

The fleet also attracts a slightly younger crowd, 45 years on average vs the rest of the industry at 46 years (CLIA).

Who is Gianluigi Aponte, owner of MSC?

Gianluigi Aponte, born on 27 June 2940, is the owner of the Mediterranean Shipping company - the parent company of MSC Cruises.

MSC currently is a leader in global container shipping operating 510 cargo ships and is the second biggest container company worldwide.

The first mention of the family is from 1675 and includes the felucca Giovannina, which for many years sailed around the Sorrento Peninsula.

In 1970, Gianluigi Aponte borrowed money and founded MSC with the acquisition of Patricia, his first ship, followed by Rafaela. He began a route between Somalia and the Mediterranean.

The rumour was that MSC would carry anything that the rest of the maritime transport industry found difficult to carry.

What nationality is MSC Cruises?

The headquarters of MSC Shipping was established in Geneva, Switzerland in 1978. MSC is a Swiss company.

30,523 staff works for MSC Cruises worldwide, on land and onboard. The ships visit 102 countries annually and transport 2.7 million passengers from 185 nationalities.

Founded in Naples, Italy with headquarters in Geneva, Switzerland, MSC Cruises is part of the MSC Group, incorporating the cargo side, which is the second-largest container shipping enterprise worldwide.

1988 - Start of the passenger cruise business

A year later, MSC took over the Lauro Cruise Line, which was only a one-ship cruise line with the Achille Lauro.

The newly formed company took the name of StarLauro in honour of Mr Lauro, Aponte's mentor and founder of Lauro Cruise Line.

The cruise fleet of StarLauro remained at two until December 1994 when the Achille Lauro caught fire and sank off the coast of Somalia on her way to South Africa.

In 1995 StarLauro acquired the Cunard Princess and renamed it the MSC Rhapsody. The same year saw the purchase of MSC Symphony.

At the same time, MSC Cruises was formally founded as a subsidiary of MSC Cargo.

In 1997 the Melody joined the fleet to bring the capacity of MSC Cruises to 4 ships.

In 2003, with the arrival of Pierfrancesco Vago at the helm of MSC Cruises, the liner started a €5.5 billion investment program to build the world's most modern cruise fleet.

The MSC Sinfonia and MSC Armonia both Lirica class ships and sisters to MSC Lirica, were purchased from Festival Cruises in early 2004 when the cruise line went bankrupt.

MSC was now operating 8 cruise ships with a focus on the Mediterranean, Northern Europe, South America and South Africa.

Part of its €5.5 billion investment plan was the build of new MSC class liners - Musica Class and Fantasia Class.

The Musica passing the ancient port of Dubrovnik, Croatia

The Musica class ships have a higher number of balcony and suites compared to the Lirica class. With an average of 2,550 passengers, this class brought about the launch of the MSC Musica (2007), MSC Orchestra (2007), MSC Poesia (2008) and MSC Magnifica (2010).

In 2013, MSC Cruises' CEO, Vago, stepped aside to become Chairman to let Gianni Onorato take over as CEO.

2013 was also the first time that the global cruise line brand would target the North American market by deploying the MSC Divina out of Miami.

The North American market was much trickier to conquer than MSC thought. They came in with the same value proposition as they had in Europe and the beginning of the season was hard.

They made a lot of adjustments for the US market, especially with the entertainment and the food. This finally ended up resulting in a success.

MSC Cruises, with a €5.1 billion investment plan, announced that it would be adding an extra four vessels to its fleet.

The first two ships (167,000-tons each) will be built by STX France (Chantier de l'Atlantique) and be the first of the Meraviglia generation cruise ships, with the delivery of MSC Meraviglia in 2017 and MSC Bellissima in 2019.

The second two cruise ships will be built by the Italian shipbuilder, Fincantieri. The 154,000-ton vessels will be the first ships under the Seaside Class. Later named MSC Seaside (delivered 2017) and MSC Seaview (launched in 2018).

The line also kept an option for an additional two more of the 167,000-ton ships with STX France and one more of the Seaside Class with Fincantieri. 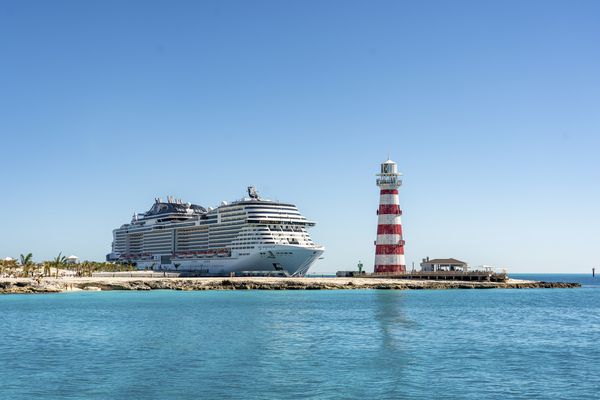 It allows an extra 87 new passenger cabins, of which 60 are balcony cabins.

The MSC Armonia returned to service in November 2014; the Sinfonia was finalised in April 2015; the Opera in July 2015 and the Lirica in November 2015. 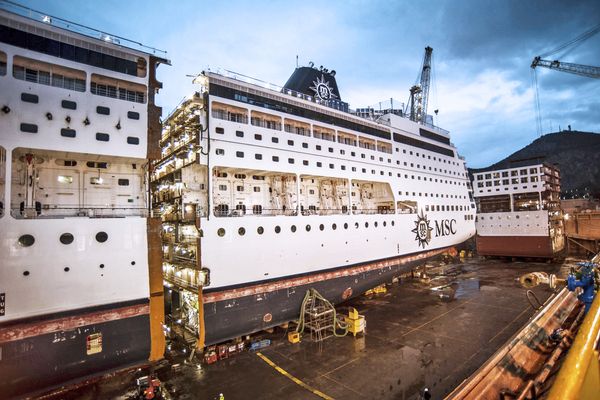 MSC Sinfonia during the renaissance programme

In December 2015, MSC Cruises announced the signature of a 100-year lease to develop a private island in the Bahamas.

After the 2014 initial €5.1 billion investment, MSC announced a further €3.9 billion to further its fleet expansion plan.

This extra investment programme will see the build of a new prototype design and adding a new class of ships -  the World-Class - to the growing MSC Cruises global fleet.

These ships will use LNG propulsion technology, a more environmentally-friendly source of fuel.

In December 2016, STX France and MSC Cruises confirmed the two options of Meraviglia-Plus class ships that were set in 2014.

Fincantieri shipyard and MSC Cruises have confirmed a further fleet expansion plan, with the build of two new Seaside Class vessels for an investment of €1.8 billion.

Instead of being Seaside Class, these two ships will be the first two Seaside EVO ships. These are to be delivered in 2021 (MSC Seashore) and 2023 (MSC Seascape).

In October 2018, MSC Cruises announced that they will be entering the ultra-luxury market with 4 ships starting in 2023.

Each 500 cabin ship will be inspired by the already popular concept of MSC Yacht Club, which features onboard most of the fleets' vessels.

The total build is estimated to be in excess of €2 Billion and will be built by the shipbuilder Fincantieri in Italy.

Explora Journeys, the name of the new brand was announced in June 2021.

Zoe was launched with MSC Bellissima and MSC Grandiosa in March 2019 and in November 2019.

26 June - MSC Cruises announced that it would be the first major cruise line to restart operations after the shut down of the entire global cruise industry at the beginning of the year.

MSC Cruises has revealed in February that the MSC Virtuosa will feature Rob, the first-ever humanoid, robotic bartender at sea.

The concept based on the existing Yacht Club will see four luxury cruise ships entering the MSC fleet. All of them will be built by Fincantieri, the new ships are due in 2023, 2024, 2025 and 2026 respectively.

Explora I, the latest ship in the MSC fleet and the first Ultra-Luxury vessel

Below are a couple of the most Frequently Asked Questions about MSC Cruises.

What is the name of the newest cruise ship?

MSC Seashore is due to enter in service in August 2021 and MSC World Europa in December 2022.

Which is the biggest MSC cruise ship?

It is tight between the two sister ships, the MSC Grandiosa and the MSC Virtuosa, both have a gross tonnage of 181,541.

Both of those ships cost €800 million and were built by Chantiers de l'Atlantique in France.

MSC Cruises is fully owned by Rafaela and Gianluigi Aponte. They have two children - Diego Aponte, who is group president of MSC Shipping and Alexa Aponte Vago, who serves as the Global CFO of the group.

What does MSC stand for on ships?

MSC stands for Mediterranean Shipping Company, which is the name for the cargo company that founded MSC Cruises.

Under MSC's initial name, the first ship that was acquired was the Monterey, purchased in 1988, announcing MSC's entry into the cruise business.

MSC Cruises first acquisition under its own brand was the MSC Symphony in 1995.

The first ship fully custom built for MSC Cruises was the MSC Lirica, which was delivered in 2003.

When was MSC founded?

MSC Cargo was founded in 1970 by Gianluigi Aponte.

MSC Cruises was started in 1988 under the name of StarLauro. In 1995, StarLauro's name was changed to MSC Cruises.

When was Lauro Lines founded?

Lauro Lines was founded by Achille Lauro in 1960, in Naples, Italy. It entered the cruise business with MS Achille Lauro and MS Angelina Lauro.

The Angelina Lauro burnt in 1979 in the port of St. Thomas in the BVI. In 1985 the Achille Lauro got hijacked and put the Lauro Lines in financial difficulties, opening it up to be purchased by MSC three years later.

The 84-year-old Italian actress was first asked to be MSC Lirica's godmother for the ship's launch in 2003. She has since christened every ship of the MSC fleet until MSC Virtuosa.

Unfortunately due to the COVID-19 Pandemic, the Virtuosa & World Europa were not christened by Loren, but by Zoe Vago, granddaughter of Aponte.

Cruise Cabin: step by step guide to choosing the right cabin for you

Which MSC Cruises Cabins Should You Choose? 17 Types of Cabins

MSC drink packages, what is on offer? A complete guide

How Much is a Deposit on MSC Cruises from the US? Know before you book